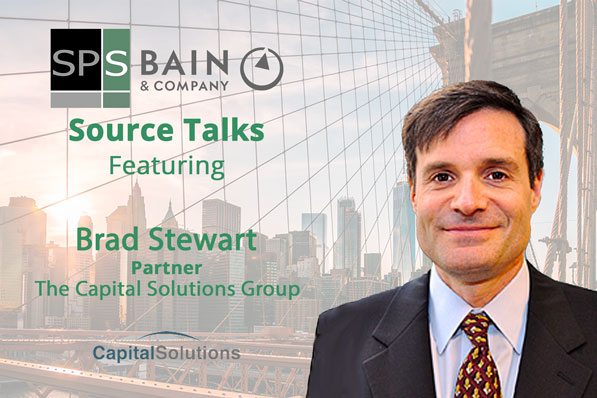 In this episode David speaks with Brad Stewart, Partner at The Capital Solutions Group, about the leveraged lending markets and trends affecting sponsors as private markets bounce back from the pandemic.

Brad, tell us a little bit about the capital solutions and your role there.

Capital Solutions is a debt advisory firm, primarily focused on sponsor back companies in the middle market and in the lower middle market. We provide debt, capital raising services, as well as restructuring advisory services. Most of our deals tend to be in the 30 to 50 million dollar credit facility size, although we’ve done a few in excess of 100 hundred million.

And Brad, obviously we the the economy seems to be bouncing back and and right at the end of the tunnel is is there with the pandemic. What’s that mean right now in terms of conditions and the leverage lending markets?

The leveraged lending market specifically for sponsor back transactions is just as robust as it was pre pandemic.

What’s really driving this is the fact that both sponsors and lenders alike came in to the pandemic with a lot of dry powder. And both groups have really been adding to the dry powder with incremental fundraising over the past six months.

What happened in the late summer, early fall timeframe is as both the sponsors and lenders realized that this dry powder, as well as a significant deal team time and resources, was not going to need to be invested inwardly into the portfolio as most had expected, the door swung wide open again for new M&A deals.

With the leverage levels today, I would say are certainly this is for a garden variety middle market company, it’s certainly at least six times potentially a little north of six times.

And for loan pricing, I would say that that’s in the four handle to you know, five handle area.

Brad, what’s what’s a recent example of a trend that you’re seeing among your clients, among the sponsors that’s surprising or that you haven’t witnessed before?

You have lenders all really trying to chase basically the same thing, which are really the highest quality companies out there, which would be defined as recession resistant or even growing, as evidenced by performance over the last 12 months during the pandemic.

Before, because we had such a deep and prolonged cycle, the prior recession was, you call it six, seven, eight, nine, up to nine almost 10 years prior to that. So, you know, a lot of companies, it was really hard to demonstrate how they would perform during the pandemic. Now, what we’re seeing is you have that instant data point and there’s an instant sort of flight to quality, if you will, of a flocking to those companies that have performed quite well during this pandemic.