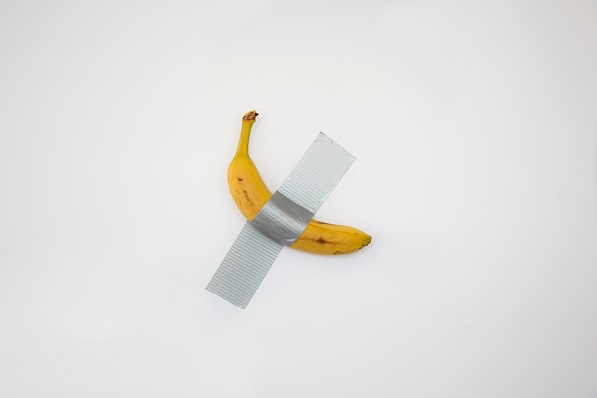 A banana duct taped to a wall sold for $120,000 at an art fair in Miami.  And then a man ate it.  Artist Maurizio Cattelan’s simple, everyday banana stuck to the wall with a piece of standard issue duct tape titled “Comedian,” attracted attention from visitors and the global eye at Art Basel Miami Beach, an annual art fair that exhibits pieces from emerging and established artists and attracts art connoisseurs, collectors, and admirers from around the globe.  The exploding interest in “Comedian” resulted in a third piece being sold for $150,000 immediately after 2 others quickly sold for $120,000.

A previous Source post discussed the increasing average purchase multiple for US LBOs, and the art industry accurately demonstrates this notion of valuation.  Interest in art equals value, and in the case of “Comedian,” the valuation goes beyond the banana and duct tape.  Anyone can purchase a banana from the grocery store and duct tape it to the wall in the same fashion, but “Comedian” is a conceptual piece.  The $150,000 valuation comes from the purchase of a certificate and Maurizio Cattelan’s intellectual property, which is why when artist David Datuna took the banana off the wall and ate it as his own performance art piece titled “Hungry Artist,” it was not a major concern for the gallery, as the banana could easily be replaced.  The commotion and fascination Cattelan created with “Comedian” increased the valuation of his piece, leading to a higher bid for a third copy of his artwork, much like how certain companies or industries may become more valuable as they garner attention from the public, leading to higher bids and purchase multiples.  So, who are the comedians in the M&A market?

According to SPS data, the deals most active in the higher valuation ranges in 2019 were in Energy, IT, and Industrials, with Energy being the sector with the most deals in the $1 billion + range, followed by IT.  The chart below breaks down this analysis of the top industries by deal size.  Industrial – misc. equipment and IT – software come up as top active across all deal ranges, with Industrial – misc. equipment topping software in the $10-49mm and $50-499 ranges.  However, once deals reach $500-999 and $1 billion+, IT – software takes over Industrial – misc. equipment.  According to this observation, it may seem that investors put more value on the IT industry, but once in the $50mm+ range, another contender comes up: Energy.

Purchase price multiples are at record highs, so the current competition is quite fierce in the M&A market as investors face increasing bids and purchase prices.  S&P Global states that multiples for US LBO transactions were at 11.5x EBITDA in 2019.  Per SPS data, of the top 20 deals with the highest purchase price multiple, over 50% were in the IT sector.  The high valuation of software companies goes beyond than just the software they provide, as oftentimes the valuation includes the intellectual property, much like the banana.

Everything is a commodity – ideas, concepts, intellectual property – and the value of something might not come from just the physical assets.  Assuming that one banana costs $0.20 given average prices, and duct tape costs less than $6 on Amazon, Marizio Cattelan’s “Comedian” was purchased at an incredible 19,354x the cost!  “Comedian” sparked interest, praise, criticism, and discussion among the public, but perhaps it is this exact public reaction where a large portion of the value comes from.  The same could be said for companies.  A company that garners a great deal of attention in a booming industry may sell at a much higher multiple.  Is it a popularity contest?  To an extent.  So next time you evaluate the worth of something, think of the banana and ask yourself, what more is there to it?  Is this your firm’s $120,000 banana?