The Revolution Will Not Be Televised (It’ll Be Streamed) 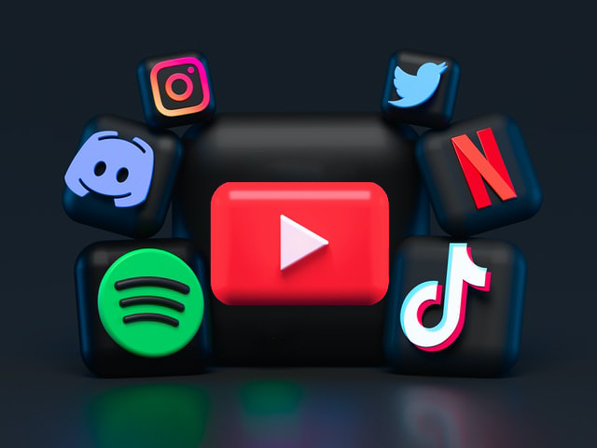 In last week’s article, we touched on the great pandemic puppy boom of 2020 and the downstream impact that consumer hoarding during the early stage of lockdowns had on the Consumer – Pet products and services sector. This week we continue our analysis of the Four Consumer Horsemen of the Pandemic: canned goods, toilet paper, gaming & entertainment, and dogs; by taking a look at the rapidly evolving gaming & entertainment sector.

Those devices, of course, provide interactive content as well as passive content. At the same time as streaming boomed, the North American gaming market grew 8.5% in 2020, from $36.9 to $40 Billion. But if you were to ask the average person what comes to mind when describing a “gamer”, odds are they would picture an unkept young man, sporting a neckbeard who still lives in his parent’s basement. In the US during 2020 however, according to gaming market data provider Newzoo, the single largest segment of “gamers” was The Time Filler, comprising 18.6% of all gamers, and they were 64.1% female. Add in the next two largest segments of Subscribers and Lapsed Gamers, the demographics are 54.2% female, 57.7% over the age of 36, and 60.9% Middle or High income. 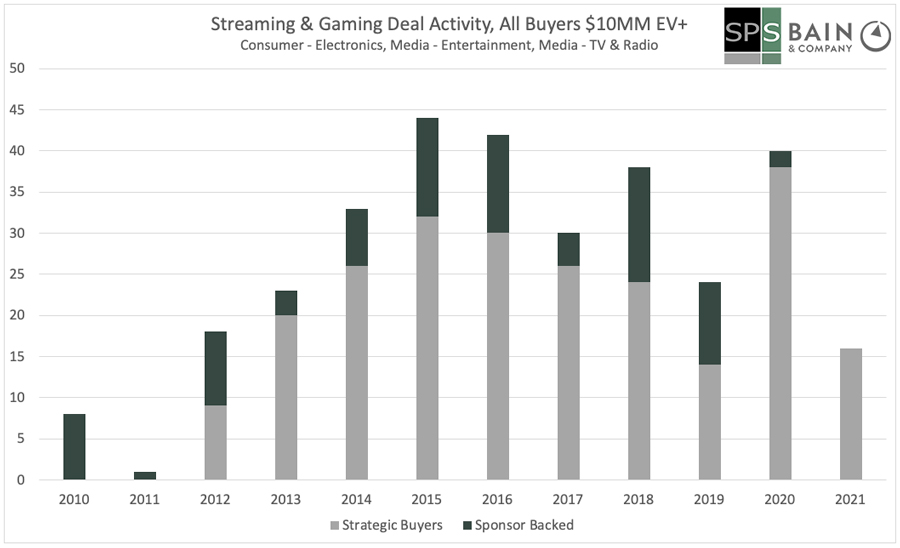 Despite strong growth and diverse demographics, Private Equity firms have seen their share of deal activity shrink dramatically since the start of 2020. PE buyers accounted for nearly 26% of all deal activity from 2010 onwards, but since the pandemic started, that number has shrank to a total of only two deals while the sector approached record highs for deal activity. A major factor to this decline is likely the blurring of the line between creators and distributors as traditional content creators are launching their own platforms to distribute their content directly to audiences, and distributors are investing in original content. 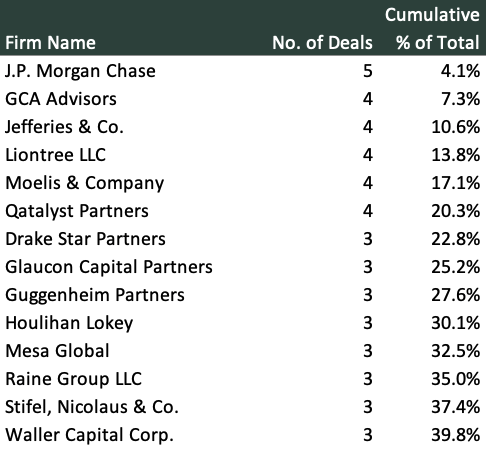 A look the intermediaries bringing deals to market shows a heavy skew towards industry-specialists rather than bulge brackets driving deal activity, with many of those bankers also working on related TMT deals in adjacent sectors. Competition in both sectors from well-known game publishers such as Epic Games, Niantic and Zynga as well as traditional media heavyweights such as Comcast and Sony, may have squeezed PE firms out of the market as buyers for the time being. That said, several recent high-profile setbacks, such as Amazon Game Studios cancelling their planned Lord of the Rings MMO to partner with its upcoming TV show, and Netflix’s recent disappointing Q1 subscriber growth, show that strategics do not have a stranglehold on this space. Sponsors looking to establish themselves in this high-growth niche could do worse than to make their introductions now to establish rapport, look for ways to add value, and discuss relevant future mandates.

Photo by Alexander Shatov on Unsplash