What does it mean?

Simply put, a “taxonomy” is the hierarchical structure by which data is organized. The new structure significantly expands the volume and specificity of subindustry tags, enhancing functionality and reducing noise across the platform, to deliver a first-of-its-kind granularity in deal sourcing analytics.

The new taxonomy was designed by Bain & Company to integrate its growing suite of next-generation private equity data solutions. Already in use by SPS’ sister company and PE deal performance analytics platform DealEdge, mutual clients can compound like-for-like insights to build an unmatched picture of where there are opportunities and how to access them.

What does it change?

The transition also facilitates a straightforward process to map out active players in a specific market, enabling clients to gain a clear-cut viewpoint of the opportunities in their target market.

Take the Consumer industry as a proxy: the sector expanded from previously including 20 sub-levels to now encompassing 96 sub-industries under the new taxonomy. 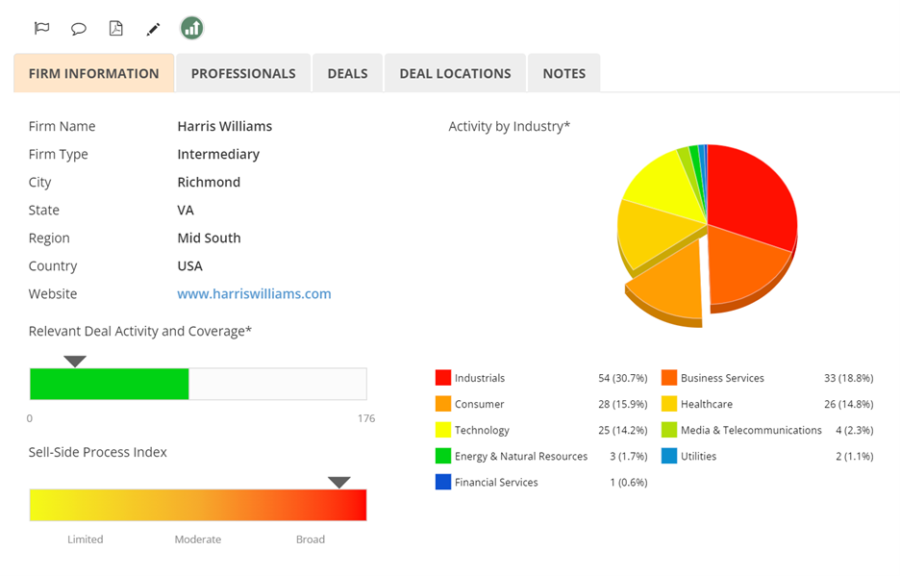 Next, users can analyze their own firm’s share of relevant deals seen within their sector of focus based on specific investment criteria, such as first institutional capital.

Funds focused on investing in niche sub-verticals within the Consumer sector – such as Home Services companies – can now use the SPS platform to get full transparency into the deals being closed within this target including the enterprise value range, the type of sell-side process conducted, and the players involved in each deal.

Why is it important?

SPS’ newly refreshed database maximizes business development efficiency for professionals vying for deals in an increasingly competitive market. With access to the platform, firms now have a more exhaustive resource to drill down and identify attractive targets within verticals and niche sub-verticals of focus, allowing them to achieve a more comprehensive view of their investment universe than ever before – when this is more critical than ever before.

As deal flow has hit record highs over recent years, market coverage has dropped as firms are challenged to identify relevant targets to pursue amidst an excess of potential prospects – with PE firms seeing only 15.8% of target market deals in 2021.

At the same time, firms are finding it more difficult than ever to stand out amongst peers. The rising trend toward narrower sell-side processes has left many generalist firms repositioning to specialize in some verticals to avoid being left off bankers’ shortlists for deal auctions.

Growing specialization and heightening levels of competition mean that funds must have a fine-grained understanding of the segments in which they have a competitive edge, and business development professionals must focus their efforts on the most active deal sources in those spaces. Coupled with the increased depth of the data taxonomy, SPS’ Intermediary Analysis tools give deal originators full transparency into their target universe, including the names of active firms and contact information for individual banking professionals closing the most deals.

Smart Data is no longer a Nice-to-Have

Gone are the days when a fund could dominate their target segment without a sophisticated data-gathering engine. The private equity firms of yore were able to achieve success with tightly defined investment criteria and a class of experienced origination professionals with deep industry knowledge.

Today, as the industry builds on learnings from the previous generation and new firms crop up daily, a targeted investment strategy is the norm and data has become urgent. BD professionals are tasked to build high quality pipelines with the most relevant opportunities, and to do it faster and better than competitors.

But what good is data if you can’t use it to find the right deals? While most firms have CRM and deal data on hand, it often sits in a static or inaccessible state and is under-utilized as a resource for better deal sourcing. If presented improperly, this can add more confusion and inefficiency in the deal origination process.

The firms that are differentiating themselves are using data smarter to build highly efficient sourcing mechanisms within the origination function. Coupled with unique platform features such as SPS Alerts, Market Coverage Reports, and Private Equity Harvest, SPS’ more granular data taxonomy derives the most value from deal data and delivers it in an automated, dynamic, and accessible manner for any user, to help – not hurt – deal sourcing.

To learn more, let us walk you through our new industry taxonomy and how it can work for your firm.

From Origination to Exits: A Q&A with The Riverside Company’s Bob Landis

Subscribe for your weekly dose of deal sourcing insights, market intelligence, and techniques.

From Origination to Exits: A Q&A with The Riverside Company’s Bob Landis